Python hosting: Host, run, and code Python in the cloud!

We have looked at simple numbers and operations before. In this article you will learn how numbers work inside the computer and a some of magic to go along with that :-)

More detailed: While this is not directly useful in web applications or most desktop applications, it is very useful to know.

In this article you will learn how to use binary numbers in Python, how to convert them to decimals and how to do bitwise operations on them.

At the lowest level, the computer has no notion whatsoever of numbers except ‘there is a signal’ or ‘these is not a signal’. You can think of this as a light switch: Either the switch is on or it is off.

To represent higher numbers than 1, the idea was born to use a sequence of bits. A sequence of eight bits could store much larger numbers, this is called a byte. A sequence consisting of ones and zeroes is known as binary. Our traditional counting system with ten digits is known as decimal.

Binary numbers and their decimal representation.

Lets see that in practice:

The second parameter 2, tells Python we have a number based on 2 elements (1 and 0). To convert a byte (8 bits) to decimal, simple write a combination of eight bits in the first parameter.

How does the computer do this? Every digit (from right to left) is multiplied by the power of two.

Try the sequence ‘00101010’ yourself to see if you understand and verify with a Python program.

Binary Left Shift and Binary Right Shift
Multiplication by a factor two and division by a factor of two is very easy in binary. We simply shift the bits left or right. We shift left below:

In code this is as simple as using the & symbol, which represents the Logical AND operator.

By changing the inputs you will have the same results as the image above. We can do the AND operator on a sequence:

This makes sense because if you do the operation by hand:

Now that you have learned the AND operator, let’s have a look at the OR operator. Given two inputs, the output will be zero only if A and B are both zero. <caption id=”attachment_847” align=”alignnone” width=”640”] 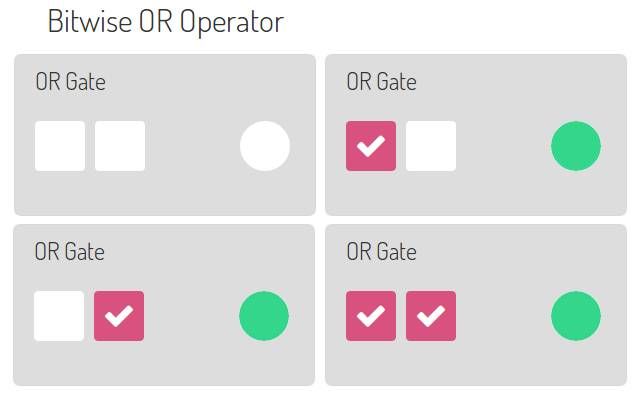 To execute it, we use the | operator. A sequence of bits can simply be executed like this:

This is an interesting operator: The Exclusive OR or shortly XOR. <caption id=”attachment_849” align=”alignnone” width=”640”]

To execute it, we use the ^ operator. A sequence of bits can simply be executed like this:

why is this happening???

The first is a bitwise logical and. It compares the bits, if both are 1 it will be 1, otherwise 0. This means the computer simply looks if there is 'high' on both numbers at the same position.

The second is not a bitwise logical and operator and simply the normal and operator. If A and B then true.
I hope I explained well, if you have any questions feel free to ask. Hope you enjoy my site :-)

wish they made a quick and to the point tutorial for all langauges as you have done.

Agreed. These tuts are amazing. They are concise, yet packed full of vital information. This is the only tutorial series I've found that is either A) able to go into bitwise operation or B) done it well at all.

How to do a logical NOT operation using this way?

You could use the ~ operator if you want the complements. An overview of the operators is here: https://wiki.python.org/moin/BitwiseOperators

Did you know the << is getting displayed in HTML code.