In this article you will learn how to implement jump and run logic in Pygame. To do so, we will implement the player logic.

Movement
Moving left and right is similar to the previous tutorial and simply mean changing the (x,y) position of the player. For jumping, we use a formula from classical mechanics:

Where F is the force up/down, m is the mass of your object and v is the velocity. The velocity goes down over time because when the player jumps the velocity will not increase more in this simulation. If the player reaches the ground, the jump ends. In Python, we set a variable isjump to indicate if the player is jumping or not. If the player is, its position will be updated according to the above formula.

If you want to jump on objects, simply add them to the screen, do collision detection and reset the jump variables if collision is true. 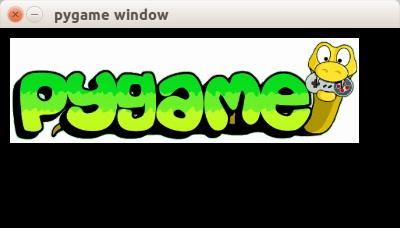 Welcome to the first tutorial of the series: Building games with Pygame. Games you create with Pygame can be run on any machine that supports Python, including Windows, Linux and Mac OS.

In this tutorial we will explain the fundamental of building a game with Pygame. We’ll start of with the basics and will teach you how to create the basic framework. In the next tutorials you will learn how to make certain types of games.

PyGame introduction
You’ll end up with a program similar to the one on the right:

A game always starts in an order similar to this (pseudo code):

The game starts with initialization. All graphics are loaded, sounds are loaded, levels are loaded and any data that needs to be loaded. The game continues running until it receives a quit event. In this game loop we update the game, get input and update the screen. Depending on the game the implementation widely varies, but this fundamental structure is common in all games.

In Pygame we define this as:

The Pygame program starts with the constructor init(). Once that is finished on_execute() is called. This method runs the game: it updates the events, updates the screen. Finally, the game is deinitialized using on_cleanup().

In the initialiasation phase we set the screen resolution and start the Pygame library:

We also load the image.

This does not draw the image to the screen, that occurs in on_render().

The blit method draws the image (image_surf) to the coordinate (x,y). In Pygame the coordinates start from (0,0) top left to (wind0wWidth, windowHeight). The method call pygame.display.flip() updates the screen.

Continue the next tutorial and learn how to add game logic and build games :-)