Save a dictionary to a file

How to make python save a dictionary to a file. These are small programs that allows you to create a dictionary and then, when running the program, it will create a file that contains the data in the original dictionary.

Given a dictionary such as:

We can save it to one of these formats:

You could also write to a SQLite database.

save dictionary as csv file

The csv module allows Python programs to write to and read from CSV (comma-separated value) files.

CSV is a common format used for exchanging data between applications. The module provides classes to represent CSV records and fields, and allows outputs to be formatted as CSV files.

In this format every value is separated between a comma, for instance like this:

You can write it to a file with the csv module.

save dictionary to json file

Today, a JSON file has become more and more common to transfer data in the world. JSON (JavaScript Object Notation) is a lightweight data-interchange format.

JSON is easy for humans to read and write. It is easy for machines to parse and generate.

JSON is a text format that is completely language independent but uses conventions that are familiar to programmers of the C-family of languages, including C, C++, C#, Java, JavaScript, Perl, Python, and many others.

JSON was originally derived from the JavaScript scripting language, but it is not limited to any one programming language.

If you want to save a dictionary to a json file

You can save your dictionary to a text file using the code below:

save dictionary to a pickle file (.pkl)

The pickle module may be used to save dictionaries (or other objects) to a file. The module can serialize and deserialize Python objects.

The pickle module is written entirely in Python, and is available in CPython implementations, such as Jython or IronPython. To enable the loading of pickles in other Python modules, pickle supports being executed from the command line.

The program below writes it to a pickle file.

Log messages can indicate an event has executed.
You can use logging for these purposes:

The log method to use depends on the severity of the message. Debug messages can help you with programming your applications but are not severe.

To use start logging, load the logging module with “import logging”.

We can use all the types of logging:

You can add debug messages to your program, and on release change the logging level to information to hide them. It’s also recommended to save logging messages to a file:

To return to debugging mode, change to:

The standard level is warning.

How to write Comments in Python (Guide)

Comments can be added to Python programs, this makes your code easy to understand by others. A comment is human readable text that is not executed by Python.

It increases the readability of your code, comments are written for software developers. Comments are ignored by the Python interpreter

A single line comment can be added by using the hash (#) character. The hash (#) is added for every line that should be commented.

If you use a modern Python IDE, it will highlight your comment in another color. Each comment is ignored by Python.

The code above will only show “Run this” in the terminal.

Then the whole block is ignored, but Python doesn’t have native multiline commenting support.

In Python you can create multiline comments like this:

Another way to do this is using triple quotes ‘’’ characters, this is ignored by Python but officially that’s for documentation not comments.

There are two main reasons to add comments to your code.

Sometimes developers add notes or todo lists in their code.

As a developer you write a lot of code, and you may forget what a piece of code does. Commenting helps you increase your productivity.

Arrays are usually referred to as lists. For convience, lets call them arrays in this article.

Python has a method to search for an element in an array, known as index().
We can find an index using:

Arrays start with the index zero (0) in Python:

If you would run x.index(‘p’) you would get zero as output (first index).

Array duplicates: If the array contains duplicates, the index() method will only return the first element.

If you want multiple to find multiple occurrences of an element, use the lambda function below.

To find an element in a string array use:

You could use this code if you want to find multiple occurrences:

The index method works on numeric arrays too:

To find multiple occurrences you can use this lambda function:

The round(x,n) method returns a rounded number x to n decimals.
The method has these arguments:

An example of using the method below (it returns 1.06):

Decimal places are not exact in a computer system, which uses base 2 instead of base 10. You can view the value that round returns with the Decimal module:

It will print the values that are stored in the computer memory. You might be surprised. These numbers are called floating points.

Round to the nearest number

Round up
If you want all floating points to be rounded up, use the math.ceil(x) method instead:

Round down
If you want a floating point to be rounded down, you could use

To make a Python program delay (pause execution), use the sleep(seconds) method.  which can be found in the time module.
The time module provides many time related functionality like getting the current time, converting epoch time and others.

The time.sleep pauses execution, making the program wait for the defined time. The time to wait (sleep) is defined in seconds. If you don’t want the program to completely freeze use threading instead.

The time.sleep(sec) method supports floating point numbers, meaning you can make it wait half a second too

A simple countdown timer from 5:

The time.sleep(seconds) is not real time. The accuracy depends on the operating system, sometimes it may be off in terms of milliseconds.

To wait about 50 milliseconds:

You won’t get exactly 50ms if you rely on the sleep method.

Most PC machines have hardware limits in the 1-10ms range, regardless of operating system. To the operating system, time.sleep() just means a hint. It’s not a good timing mechanism, but good enough for most applications.

Operating systems may have different implementations, causing a difference in time. 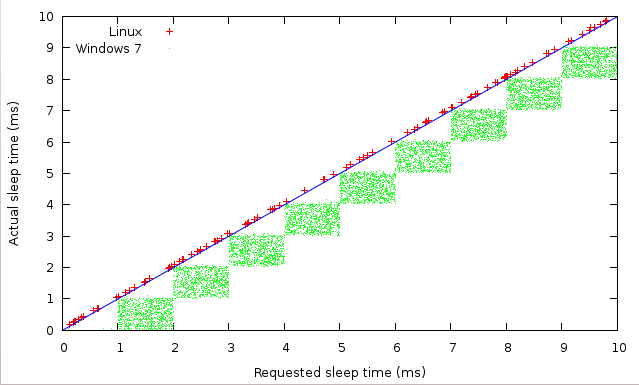 A computer system used to create artificial speech is called a speech synthesizer, and can be implemented in software or hardware products.

A text-to-speech (TTS) system converts normal language text into speech. How can we use speech synthesis in Python?

Pyttsx is a cross-platform speech (Mac OSX, Windows, and Linux) library. You can set voice metadata such as age, gender, id, language and name. Thee speech engine comes with a large amount of voices.

And execute it with python.

eSpeak is a compact open source software speech synthesizer for English and other languages, for Linux and Windows.

We can install using:

It is very easy to use, but like pyttsx it sounds very robotic.

The gtts module no longer works.

I found a script on Github that uses the Google speech engine. The script comes with many options and does not speak, instead it saves to an mp3. We added a command to play the mp3 automatically:

The voice is extremely natural. The only disadvantage is that you need to be connected with the Internet when running this script.

Methods can be applied to Python strings, where a string is somet text between quotes. An example of using the string method replace, which replaces the a sub-string in a string:

Python has support for both mathematical operations and functions.

Mathematical operations
An overview of operations:

Tip
You can use the Python interpreter as calculator. To do so you simply start Python without an IDE and filename. Example:

An Integrated Desktop Environment (IDE) is a software application for programming. In addition to simple text editing they have all kind of features such as syntax highlighting, code completion, tabs, a class browser and many more.

The online interpreters may not work for everything but will work for most of the beginner tutorials. I recommend using a desktop IDE or the official Python interpreter.

Overview of IDEs (You only need one)

I thought it would be cool to create a personal assistant in Python. If you are into movies you may have heard of Jarvis, an A.I. based character in the Iron Man films. In this tutorial we will create a robot.

The features I want to have are:

For this tutorial you will need (Ubuntu) Linux, Python and a working microphone.

This is what you’ll create (watch the whole video, demo at the end):

Speech recognition can by done using the Python SpeechRecognition module. We make use of the Google Speech API because of it’s great quality.

Various APIs and programs are available for text to speech applications. Espeak and pyttsx work out of the box but sound very robotic. We decided to go with the Google Text To Speech API, gTTS.

Using it is as simple as:

The program below will answer spoken questions.

To create a graphical interface (GUI) in Python you need to make use of a library or module.  There are at least three widely used modules for creating GUIs with Python:

While you can create a graphical user interface (GUI) with any of these modules, they do not have the same features.

Tk provides basic widgets such as a button, menu, text and label. It is very limited compared to QT4 and WxPython but it is also the oldest module.  It runs on most versions of Mac OS, Linux and Windows. a messagebox in Tk. GUIs made in Tk do not have a native look.

QT4 and QT5 are developed by the Qt company.  Graphical applications made with QT4 or QT5 run on Windows, Linux/X11 and Mac OS X.  It has tons of widgets including tabs, buttons, item views, table views, progressbars, input fields, calendar views and many more. Compared to Tk it has a lot more widgets available.

WxPython is a module that creates a native GUI look regardless of the operating system used. On Windows it will look as windows application while on Mac OS it will look as a Mac application. This can be a clear advantage compared to QT4 or Tk, depending on your purpose. WxWidgets has many widgets available such as buttons, menu, text but also more advanced widgets as a htmlview or tree control.

A window created with wxPython. wxPython has native appearance on all operating systems.