Matplotlib can be used to create histograms. A histogram shows the frequency on the vertical axis and the horizontal axis is another dimension. Usually it has bins, where every bin has a minimum and maximum value. Each bin also has a frequency between x and infinite.

A complete matplotlib python histogram
Many things can be added to a histogram such as a fit line, labels and so on. The code below creates a more advanced histogram.

A line chart can be created using the Matplotlib plot() function. While we can just plot a line, we are not limited to that. We can explicitly define the grid, the x and y axis scale and labels, title and display options.

Line chart example
The example below will create a line chart.

simply define the data to be plotted.

If you want to save the plot to the disk, call the statement:

If you want to plot using an array (list), you can execute this script:

defines start from 0, plot 20 items (length of our array) with steps of 1.

If you want to plot multiple lines in one chart, simply call the plot() function multiple times. An example:

In case you want to plot them in different views in the same window you can use this:

Styling the plot
If you want thick lines or set the color, use:

Matplotlib is a python library for visualizing data. You can use it to create bar charts in python. Installation of matplot is on pypi, so just use pip: pip install matplotlib

The course below is all about data visualization:

A bar chart shows values as vertical bars, where the position of each bar indicates the value it represents. matplot aims to make it as easy as possible to turn data into Bar Charts.

A bar chart in matplotlib made from python code. The code below creates a bar chart:

Matplotlib charts can be horizontal, to create a horizontal bar chart:

You can compare two data series using this Matplotlib code: 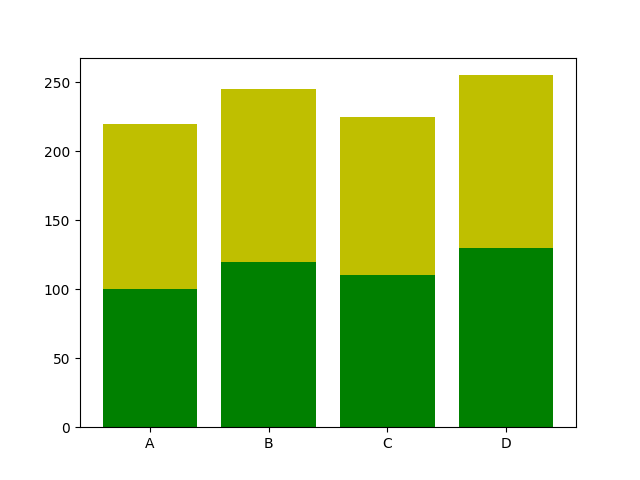 The legend() method adds the legend to the plot. In this article we will show you some examples of legends using matplotlib.

Take into account that we set the number of columns two ncol=2 and set a shadow.

The complete code would be:

Legend outside right
We can put the legend ouside by resizing the box and puting the legend relative to that:

Matplotlib is a python plotting library which produces publication quality figures in a variety of hardcopy formats and interactive environments across platforms.

Related course
The course below is all about data visualization:
Data Visualization with Matplotlib and Python

For those who didn’t know, matplotlib savefig creates a file of the current figure as a PNG (with transparency), and saves it to your filesystem.

Savefig is useful when you need to save a figure for viewing outside of matplotlib, such as in another program, or when you want to use a vector graphics program (Inkscape, Illustrator, etc.) to modify it.

It’s also useful if you want to save a copy of a figure in the same directory as your matplotlib script.

It can make an image from the figure. It decides on the image format based on the extension. For example to save a jpg image named figure1. jpg. The figure image must have an extension of jpg, png, or pdf.

The savefig() method is part of the matplotlib.pyplot module. This saves the contents of your figure to an image file.

It must have the output file as the first argument. You can add the full path, relative path or no path. If you don’t define a path, it will save the image in the current working directory.

The most basic program you can do is just 5 lines of code:

This works for larger plots too:

You can open your file with any external image program, because it’s just a regular image. If you use Linux, you can use the command below:

A plot saved to a pdf

A number of new savefig options have been added to matplotlib. Backwards compatibility is maintained.
The options are:

Save as PDF file

To save your matplotlib chart as a pdf, just change the file extension to .pdf

The file will be saved in your working directory.

Save as SVG file

SVG is another vector-based graphics format, which lets you zoom in without losing quality. Not every program can open the svg image files.

To save as an SVG file, just change the extension to SVG

Save as JPEG file

If you save as jpeg file, you can include the quality parameter. This lets you save some disk space, but at the cost of image quality.

In general I recommend going with vector graphics formats like svg or pdf, because the quality is higher. If you don’t care about quality and just want to email the image or show it on a website, you could use png or jpeg.

Matplotlib supports plots with time on the horizontal (x) axis. The data values will be put on the vertical (y) axis. In this article we’ll demonstrate that using a few examples.

It is required to use the Python datetime module, a standard module.

Plot time
You can plot time using a timestamp:

If you want to change the interval use one of the lines below:

A heatmap can be created using Matplotlib and numpy.

Related courses
If you want to learn more on data visualization, this course is good:

The histogram2d function can be used to generate a heatmap.

We create some random data arrays (x,y) to use in the program. We set bins to 64, the resulting heatmap will be 64x64. If you want another size change the number of bins.

The datapoints in this example are totally random and generated using np.random.randn()

Matplotlib plots can be included in a PyQt5 application.
Several imports need to be added:

We create a widget called PlotCanvas that includes the Matplotlib plot.

PyQt5 Matplotlib example
The example below embeds a matplotlib plot in a PyQt5 window. We add a qpushbutton.

Matplotlib can create 3d plots. Making a 3D scatterplot is very similar to creating a 2d scatter plot, only some minor differences. On some occasions, a 3d scatter plot may be a better data visualization than a 2d plot. To create 3d plots, we need to import axes3d.

Introduction
It is required to import axes3d:

Give the data a z-axis and set the figure to 3d projection:

The final plot is shown with plt.show()

A correlation diagram can be created using Matplotlib. Matplotlib is the most used plotting library for Python. It can be included in all the graphical toolkits that are available for Python.

Matrix definition
To start we define a 2x2 matrix and a list called groups. The matrix is defined inside the brackets (double [[ and ]] if written on a single line).

The code below generates a Matrix correlation diagram using Matplotlib.

Initially we define the matrix (m) and the list (groups).
We set the length to be equal to the length of the groups. On the x axis and y axis we set the group names.